The Outlook for today wasn't so good.

... well the weather was great!


Apart from being very busy in the office I had a bit of a problem today with Outlook that was quite an odd one, I eventually figured it out (sort of) so decided to put up my 'fix' to hopefully help someone else out there.
I was reading this link on Microsoft Answers, there is a lot of help there and maybe it may help you where it was not able to help me. The only reason for my solution I can think of is that by creating a new profile it reset some of the reg keys Erik Rozell pointed out, or perhaps a different key?

I've copied and pasted what I said on the Microsoft Answers site; for clarty.


The next Outlook problem that was reported was a new user, new laptop, freshly reinstalled Office 2010 earlier in the week as Word crashing shortly after opening, that ended up being the Dell 3110CN driver. So we had a pretty much fresh machine with an Exchange account. The end user tried to create a sub folder under his Inbox and was greeted with this error: 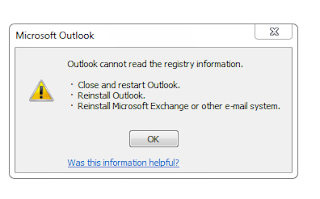 Outlook cannot read the registry information.
Fortunately it was not as drastic as the last two, unfortunately it wasn't as easy as the first one. It was sort of in the middle of the first two. A quick and simple repair. Go to Programs and Features, Find Microsoft Office in the list, choose Change and then Repair. Nice and simple. Microsoft, if you're reading please add Repair Office/Outlook into the list :)
PS:If an application crashes shortly after opening and a Repair or reinstall doesn't fix it look at the printer drivers. I've some across this quite often, it's partially caused by people installing the wrong drivers, XP/2003 rather than Vista/2008/Windows 7 drivers. Remove ALL the printer objects AND drivers. This had my colleague stumped for days, until she went on holiday and I took the case on. I think I'll do a techblog about removing printer driver properly tomorrow, covering Windows XP and 7.
I hope someone finds this information useful.
Caió!
Posted by Jayton Garnett at 22:41